My credo as a pulmonary specialist, internist and vascular specialist in Vienna

After studying medicine at the University of Vienna, I promoted Dr. Univ in 1993. Med., To begin immediately afterwards with scientific research at the Department of Internal Medicine I, Hematology. Within three years of intensive research in the field of blood clotting allergy and vascular wall interface, I have published several publications in renowned international scientific magazines as a vascular specialist. In 2000 he was awarded a postdoctoral qualification as a university professor in the field of vascular biology and thrombosis research.

Between 1994 and early 1997, I was also a clinician in the haematological department as a vascular specialist and a pulmonary specialist in order to gain experience on various blood diseases of different origins. During this time, I gave several international and national lectures on my research activities, especially in the field of hematology.

University work as a pulmonary specialist and vascular surgeon in Vienna

As a professor of the Med. University of Vienna, I regularly hold lectures in the field of pulmology. The topics and dates of the current academic year can be found in the lecture schedule of the Medical University of Vienna. In addition, I am a university mentor for students as part of diploma theses and dissertations as well as doctoral students. 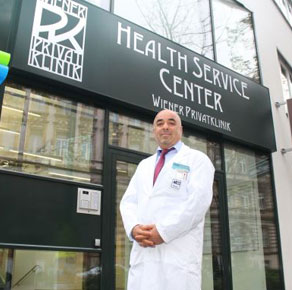 In September 2006 I took over as head physician the management of the pulmological station at the University Clinic for Internal Medicine II (formerly IV) at the AKH in Vienna.

Would you like to know more about my work as a pulmonary specialist and a vascular specialist? Then do not hesitate to contact my ordination.